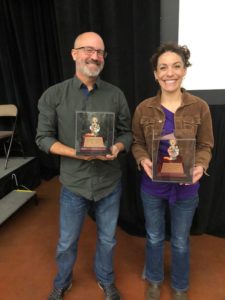 Chris Gall is this year’s winner of the Judy Goddard Children’s Award. He has been drawing pictures for as long as he can remember. When he was caught doodling on his desk in second grade, his teacher suggested that he might become an artist someday, then made him clean all the desks in the classroom. In seventh grade, Chris won a Read Magazine Young Writers Award, and that inspired him to create stories to go with his art. After graduating from the University of Arizona, Chris became an award-winning, internationally recognized illustrator, and his artwork has been shown in almost every publication in America, including Time, Newsweek, People, Fortune, The New York Times, and The Washington Post.

Chris has also worked as an adjunct professor of art at the University of Arizona and spent four years as a professional stand-up comedian. He currently lives in Tucson, Arizona, where he volunteers for the Southern Arizona Rescue Association (Pima County Search and Rescue.)

Sonja Stone is this year’s winner of the Young Adult Award. She studied psychology and creative writing at Washington College, trained at Le Cordon Bleu for a cover job as head pastry chef, and completed a course at the same survival school where Tom Hanks prepared for “Cast Away.” She currently lives with her family in Scottsdale.

Her books, “Desert Dark” and the sequel, “Dark Divide,” are thrilling spy stories, featuring teens at Desert Mountain Academy, an elite Black-Ops government- funded training school. The books explore themes of survival, trust, loyalty, teamwork and ethics,  as Nadia, the main character, learns that someone on campus is a double agent, and she is being framed as the spy.

One of our committee members stated, “One strength of this book is featuring a strong, highly intelligent female protagonist who is unashamed at being good and math and science and using her brain.” In addition, there are several well-rounded male personalities, making this a book appealing to both boys and girls.

“Desert Dark” has received several state awards, including  a Grand Canyon Reader Award nominee. In 2017, the Bank Street College of Education named “Desert Dark” as one of its Best Books of the Year, for ages 14-up.

What is the “Judy Goddard Award”?

Sensing the importance of recognizing authors and illustrators whose work captures the uniqueness of Arizona and the Southwest, Judy Goddard, the founder of Libraries, Ltd., worked with members of the Arizona State Library Association in 1983 to establish an award for excellence in books about Arizona for children.

Originally, the award was named the Arizona Author Award. In 1997, this evolved into two awards: one for children’s authors and illustrators and the other for writers for the young adult audience. At this time, the boards of both organizations voted to change the name of the awards to honor the work of the awards’ sponsor. The awards were renamed the Judy Goddard/Libraries, Ltd. Arizona Children’s Author/Illustrator Award and the Judy Goddard/Libraries, Ltd. Arizona Young Adult Author Award.

As of 2019, Libraries Ltd will give only one award each year instead of two. The award will be presented to the author/illustrator whose work best meets our criteria for either children or young adults. The most important criteria are literary and/or artistic merit and that the work features or is closely identified with Arizona and the surrounding regions. Preference is given to authors living in Arizona.