We are saddened to report two recent deaths of long-term members:

Irene Ruth (Walsh) Ahearn passed away on Feb. 6, 2019 at the age of 93. A mother of six, including our current secretary Mary Ahearn Lee, Irene was a resident of Arizona for 70 years. Born on November 19, 1925 in Keene, New Hampshire, Irene earned a nursing degree in 1944. Along with a childhood friend, she moved west after World War II. While working at the Arizona State University Infirmary, Irene met her future husband John. They were married in 1955, lived briefly in Tucson for graduate school at the U. of A., and moved permanently to Phoenix in the late 1950’s.

Irene enjoyed volunteerism, contributing to the community in various ways as an ESL and literacy coach, a Hospice caregiver and volunteer at the Interfaith Cooperative Ministries’ food and clothing bank. She was also a long-time member of Libraries, Ltd., where she served as Recording Secretary for many years.

Irene enjoyed travel, playing the piano and singing, and studying a wide range of subjects, from science to ancient and biblical history. She was a successful raiser of de-nested baby birds, a famous tolerator of her children’s unusual and less-lovable pets, and a serious, even fierce player of card and board games.  Most importantly, she loved and cared for others well, and is greatly missed by her six children, their husbands and wives, grandchildren, and great-grandchildren.

Rosalee Hughes Spaulding passed away on March 23, 2019 in Tucson at the age of 75. She was born on July 28, 1943 in Geneva, New York, but due to health challenges, the family moved to Tucson when Rosalee was seven years old.  They settled in the Poet’s Corner neighborhood, where Rosalee attended school at Peter Howell Elementary and later St. Joseph’s Academy. Upon graduation, Rosalee enrolled at the University of Arizona, where she majored in English, minored in History, and achieved a Master’s degree in Education. She dedicated her life to education, serving as high school teacher and librarian first in Coolidge, AZ, and then in Tempe, AZ at Corona Del Sol High School for 33 years. After her retirement, Rosalee became involved with Libraries, Ltd., following the legacy of her mother Rosemary, who was a long-time member. Rosalee was a dog lover who had several beloved pets.

Libraries, Ltd. was honored by the Arizona Reading Association for their contributions to literacy at a breakfast and workshop on November 4, 2017 in Mesa.  Members attending were Marsie Habib, Toby Smitt, and Marilyn Ludwig.  Libraries, Ltd. was one of eight recipients of the “Celebrate Literacy Award.” 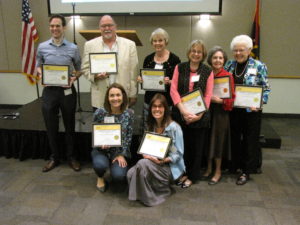 Pictured above are all the winners:

Libraries, Ltd. has recently invested a portion of our assets in two foundations. We have opened a Reserve Fund in the Tucson-based Community Foundation of Southern Arizona to support our ongoing literacy projects. In addition, we have established an Endowment Fund in the Arizona Community Foundation, headquartered in Phoenix. The Endowment Fund is a permanent fund in memory and honor of our founder, Judy Goddard.